New Voices - are you brave enough?

Well, the time is fast approaching.  So the question is......are you in?...or are you out???????
Some people I know are out - for a good reason - they've been published in the last year.  WHOOPEE!
But others, still have a superb chance to shine this year like a glistening star in a dark night sky.
See, I'm being all writerly.

I have to put my hands up and say, that last year, I read EVERY entry.  Over 800 of them.  And about a quarter of them were uploaded on the last day at about a quarter to midnight!

I also was taken aback by some of the comments.

Now, I don't think anyone can accuse me of being a shrinking violet.  Last year, I registered under a pseudonym and commented on lots of the entries - constructively, or so I thought.  Until someone took umbridge when I pointed out a little mistake in her entry.  And she chewed me up and spat me out.

This year I will look for her and smile sweetly thinking to myself - wait until you're given revisions Missy - that'll sort you out!!!!!!!

Some of the comments last year were nothing short of acerbic.  And as my granny always said, "If you can't say something nice, say nothing at all."  And I was conscious of that.  And I will be this year too.

But most of all I'm looking forward to the chance, once again, to get the opportunity to read loads and loads of first chapters.  I want to find some, that I reach the end and think... NO!!!!!!! WHAT HAPPENS NEXT???????

Some of the other Mills and Boon authors got accused of favouritism last year, or having secret knowledge, when they said they liked something.  But they didn't.   They were there as a reader, just like I was, and simply said what they enjoyed.

So this year I will be brave and will be commenting as Scarlet Wilson.  And letting the world know what I love!  So are you in...or are you out?????????? 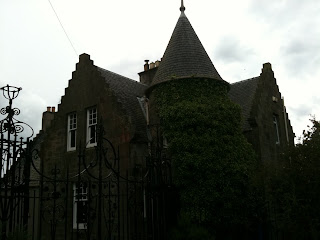 So, I went for lunch on Saturday with my eldest son.  And as usual I decided we would go to a farm shop/tea shop.  I'm a great lover of these places, while my son was crossing his fingers and praying for a McDonalds.
As we drove along the country road we passed this house with the turret.  I was so impressed I turned back - not easy on a country road.
What kind of a house has a turret?  This is on a farm road in Ayrshire, in the middle of nowhere.  I was even more intrigued by the big wrought iron gates.  But the absolute mystery for us was the fact that underneath all the foliage on the turret, was a window.  You can just see the bottom edge of it in the picture.
Now why would you have a house, with such a beautiful distinguishing feature, and let foliage cover the window?  My son automatically started giving ideas - but they were all to do with spies and wizards.
I thought it could be a setting for a lovely romance novel, with a touch of mystery.  What do you think?
Posted by Scarlet Wilson at 11:35 8 comments:

Revenge of the Couch Potato

So I finally decided to do it.  There's only so many times I can sit on the couch and watch the kids go out on their bikes with their dad.  Plus, August means two boy birthdays - and both required bikes, so I've become Halfords best customer.   Three days after I bought their bikes I went back - to buy one for myself.

Now, that may not sound like much.  But the last time I was on a bike it was called a Hercules and I was 13.  And I've never ridden a bike with gears before.  I mean, GEARS??  Why on earth does a bike need gears? You get on.  You peddle.  That's it.  What's the big deal.

Heaven help Halfords best salesman.  The colour drained from his face really quickly when he realised the magnitude of the job ahead of him.  He made me cycle around the car park three times, desparately trying to explain gears to me, before letting me cycle home.

And by the time I got home I had to lie down.  I kid you not.  My legs were shaking. 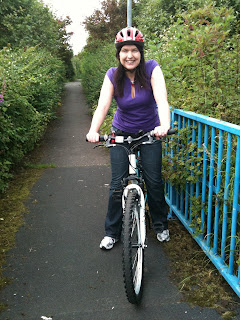 Out today on the bikes with the kids.

And shortly after this picture was taken?  I got a puncture.  I kid you not.  I cycled my whole childhood without one puncture.

So my bike is currently in Halfords getting fixed - after I purchased the years care plan of course!
Posted by Scarlet Wilson at 09:30 8 comments: