Scottish Hen Nights and How Well Do You Know Your Friends?

It seems that these days hen nights are big business.  It's all limousines or fire trucks or weekends away to foreign climates.
When I was a girl (and I'm not that old!) hen nights involved your work mates making you a coat decorated with L plates and coloured tissues made into flowers.  And they also decorated a potty for you to jump over on your hen night.
Here is the evidence 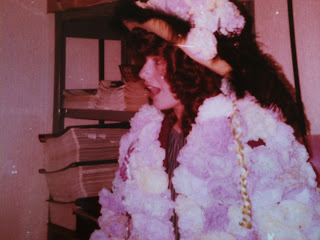 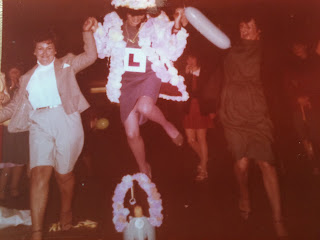 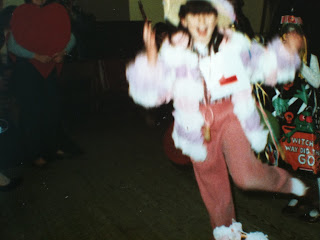 So, the top two pictures are my sister Valerie and were taken 25 years ago.  The bottom picture?  I'll leave you to figure out who the 10 year old imitating her sister is!

So, recently I had to help organise a hen night for a work colleague.  It was her second wedding and she didn't want a big fuss.  We had booked a table at a local restaurant and decided to organise a few games (we also organised a potty that was full of HRT and incontinence aids!).  One of the games we picked was to ask her friends to reveal a secret about themselves - one she might not know.  And on the night we made her try to identify which of her friends was the secret keeper.
Here is the list

1. Was asked out by Captain Sensible?

2. Burned a hole in the front of her wedding dress, the night before she got married?

3. Was accepted for music college as a drummer after working in clubs in Glasgow?

5. Featured on a TV production of “My Secret Desire” as she wanted to swing from a trapeze with her teeth?

7. Did advanced archaeology at teacher training college and as a result had to lead a mock “charge” across Bannockburn!

8. Had elocution lessons in her young days?

9. Went to the pictures with one man and left with another?

10. Frequently travels on the Orient Express?

11. Had lunch with the Bay City Rollers in Tam Paton’s house in Edinburgh?

12. Got married wearing a pair of green boots?

16. Has secretly written an episode of Star Trek where she is Captain Picard’s daughter?

17. Was a Scottish skating champion?


We had hours of fun with this!  One poor work colleague, Brenda, who hadn't contributed something to the list, was accused of all 17!
I'll let you try and guess which one of the 17 was mine.
Now, what about yours?  Can you reveal a secret you haven't told us about??
Posted by Scarlet Wilson at 02:36 8 comments:

Book 2 is sold! and The One That Got Away

So I've had a lovely email to say Book 2 is sold and it's title will be......
The Boy Who Made Them Love Again and is scheduled for December 2011.
Now, it's definitely not a Christmas book, so what do you think about that?  Do you only buy books around that time that have a Christmas theme?
Or by that time are sick of Christmas overload and are looking for something different?
And I was delighted because my editor told me it brought a tear to her eye - you don't get better than that!  Now Book 2 has a different theme.  And the theme is The One That Got Away.
Do you have one of those?  Is there somebody from long ago that you occasionally remember and think mmmm........what if?
I remember reading somewhere that everyone has one of those, whether they admit it or not.
Book 2 also has a different kind of medical theme - it's about the staff from the White House Medical Unit.  It can be difficult to find something that hasn't been used in medicals before but I haven't ever seen this used and was delighted to give it a go.  And I also have a First Baby. 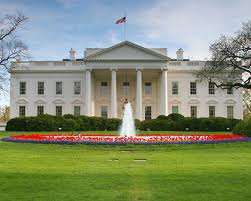 And yes, that is what I meant.  I was inspired one day looking at Michelle Obama and thinking to myself that there, in the White House, for the first time in a number of years we had the potential for a White House birth.
But my First Lady doesn't want to give birth in Washington, she wants privacy and needs rest, so she heads to Mendocino Valley and Pelican Cove, a quiet little hospital and goes into labour early.  And that's where all the fun starts!
So Book 3 will be a follow-on from this and I'm pleased to say I've agreed a new contract with Mills and Boon and will be writing a few more medicals.  WHOOPEE!
Posted by Scarlet Wilson at 12:46 12 comments: